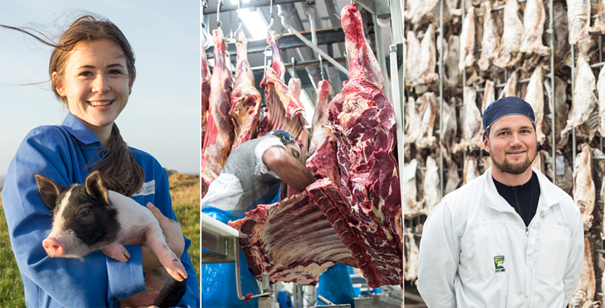 There is no doubt that people in the accounting department have much more time than they had before and can spend their time on other issues that are critical to the daily operation.

Implementing the invoice module for eye-share Workflow has meant that for the slaughterhouse and meat processing company Fatland, dunnings and debt collection claims are a thing of the past.

The Fatland Group has offices and production facilities in four different locations in Western and Eastern Norway. By implementing eye-share Workflow Invoice in 2016, the Group was able to take full control of their invoice workflow.

The level of control we have achieved by using eye-share Invoice is essential for the Group. We always know where every single invoice is, and that all invoices flow through the same system. We know that if the invoice can’t be found there, we haven’t received that invoice. We have had a few instances where we have disagreed with the vendors, where the vendors usually have been wrong because we now have a consistent and clear way to do it. It’s very rare that vouchers disappear. Eye share and the stability of the software is great”, Roar Malmin says. He is the Chief Financial Officer in Fatland Jæren AS, and in charge of the consolidated accounts.

The level of control we have achieved by using eye-share Invoice is essential for the Group.

Had to get full control

As a CFO for the Group with 650 employees, of whom 100 are users of eye-share Workflow Invoice, it was important for Malmin to get full control of the invoice flow.

We were doing everything manually and had different work processes at our different locations. Paper invoices were signed and delivered everywhere, resulting in some invoices arriving by mail and others by email – to multiple, and often wrong, addresses. Many invoices were sent directly to the employee’s home address. This gave us several challenges; we never had any control over the invoices we had, and we didn’t know which invoices that were in circulation by period end. For example, we were not able to evaluate accruals properly, and the risk of paying the wrong invoices was imminent. Periodically, we were also lagging as a company and as a result we received several dunnings and debt collection claims. Invoices used to be put in a drawer once the production department had busy periods, Malmin explains.

He now experiences a much more transparent working day.

Now we have one centralized scanning location to control all vouchers, add coding lines with ledger information and more. The accounting department usually doesn’t see the voucher before it is sent for control – a control that is much faster than if we had to do everything manually. If we need assistance, the quality of eye-share Support and Eye-share’s support system Quick-Share is very good. The issues will always be solved, and the response time is usually very good.

Periodically, we were also lagging as a company and as a result we received several dunnings and debt collection claims.

Customized for the meat packing industry

The Fatland Group receives 25,000 invoices annually, and Malmin has, together with Eye-share, made several tailored customizations to the eye-share Workflow Invoice software to optimize the solution specifically for their industry.

We usually buy meat from Germany if we have acquired all the available meat from Norway and there is still a demand for meat in the market. I buy euros for each unit of meat we import to know the exchange rate in advance. To simplify this process, we have a custom function in eye-share Invoice that adds the exchange rate upon transferring the voucher to the ERP system. In addition, we have made functionality to change currency rates at line level. It is very convenient, Malmin says.

eye-share Workflow Invoice has had a positive impact on Fatland in several areas.

In addition to more security and more control, we have also become more efficient by using eye-share Workflow Invoice. There is no doubt that people in the accounting department have much more time than they had before and can spend their time on other issues that are critical to the daily operation. The replacements functionality in eye-share Workflow Invoice makes us more robust during vacations and absence, allowing us to easily delegate tasks to people present at work. The possibilities for getting invoices processed is much better, and if someone is overloaded with work, it is easy for us to get in contact and solve it easily. It is important for us to pay on time when the supplier has delivered something to us, Malmin says.

There is no doubt that people in the accounting department have much more time than they had before and can spend their time on other issues that are critical to the daily operation.

The auditor also has an easier task after Fatland started to use eye-share Workflow Invoice.
In the past, it could take several minutes to retrieve the vouchers, now it takes seconds. It makes it much easier to look up the vouchers, which also lowers the threshold to check them at regular intervals. We have also given the auditor full access to the entire system, so they can easily check what they want from their own office.

Fatland has been in the Norwegian meat packing industry since 1892. The Group had a turnover of 4000 MNOK in 2015, with a slaughter volume of 37 000 tons (about 17 percent of the total Norwegian production), a cutting amount of 42 000 tons, and processing of 28 000 tons of meat. Today, Fatland has 650 employees working with meat in four locations in Eastern and Western Norway.

The invoice process at Fatland

Invoices, either in EHF, PDF, or paper format, is received in a joint scanning center. Paper invoices are scanned, sent to an email address where the invoice is then interpreted. Ledger information is then added before the invoice is finally sent for approval.

Fatland uses a two-tiered approval process, in addition to a final control by the accounting team. The invoice is first sent to the person who is familiar with the cost – typically the person who ordered the goods as this person has first-hand knowledge and can code the invoice correctly – whether it is cost, or maintenance related. This increases the quality of the coding. Subsequently, the invoice is sent to the approver and then to the final control. An accountant checks whether the formal requirements are met, that the coding looks reasonable and that the VAT information is correct. The invoice is then transferred to AX and remitted from there.